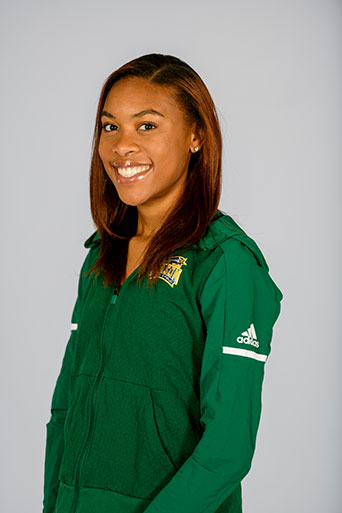 Ashley Lewis is a member of Mason's track team, a bioengineering student, blogger, and so much more. Photo provided.

Rising senior Ashley Lewis is no stranger to hard work and endurance. As a bioengineering student, member of the Mason track team, blogger, and summer intern for the Stanford Summer Research Program (SSRP), she has found ways to juggle her many dreams and aspirations.

“I have a lot of interests, and my time at Mason showed me even more things I enjoy,” says Lewis.

Lewis came to Mason’s Fairfax Campus from Boston, Massachusetts as a biology major and member of the track team. She discovered her passion for bioengineering after attending some bioengineering seminars through the Office of Student Scholarship, Creative Activities, and Research (OSCAR). She connected with one of the presenters and eventually started her first research position with Mechanical Engineering Assistant Professor Jeff Moran.

“I always had an interest in analyzing and asking how something works. I want to know not only why is something the way it is, but I want to know the nitty-gritty, and my course work in biology wasn’t satisfying that curiosity,” says Lewis.

After Lewis took some engineering courses, she realized that engineering was where she wanted to be. She changed her major to bioengineering her sophomore year.

Within the broad field of bioengineering, Lewis admits there are still a lot of things to figure out. “There is so much to learn, and I’m taking this time in my internship to narrow down what I want to focus on,” she says.

Her summer internship with Stanford is another starting line for Lewis. She hopes that the mentorship she gains from the program will give her more guidance on what research areas she wants to pursue, even though the program has gone virtual.

“While it would have been a dream to be able to be on the Stanford campus, I’m happy that I’m able to still make the connections, network, and get great mentorship,” says Lewis.

So far in her internship, Lewis is focusing on genetics-based projects that look at how different factors affect immune responses and other disease pathologies. “We are still molding it, figuring out what to work on,” says Lewis.

“From the beginning of her work with me, Ashley displayed a rare combination of work ethic, intellectual curiosity, and drive to succeed. As soon as she started, she hit the ground running. Throughout her time in my group, she was continually asking for more work to do, more papers to read, and other ways she could be helpful. Ashley has a stellar future ahead of her,” says Moran.

Outside of the classroom and internships, you can usually find Lewis on the track or blogging about health and fitness. “Running is a big part of my life. I’ve been blessed to have some amazing coaches and teammates,” she says.

After graduating, Lewis knows that health and running will remain a part of her path, no matter what she decides to do.