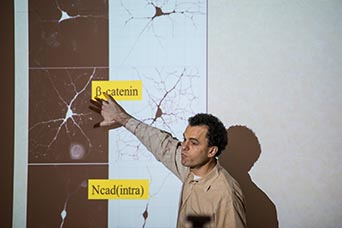 Mason researcher Giorgio Ascoli presents a decade’s worth of work on the NeuroMorpho project at the Krasnow Institute for Advanced Study. (Photo by Evan Cantwell)

Giorgio Ascoli, professor of bioengineering, is developing technologies and models to investigate neural circuits from molecular to whole brain scales.

Mapping neurons, each of which may have between a dozen and many thousands of branches, takes hours of manpower. Even with improved efficiency, mapping the neurons currently in the repository would take over 700,000 hours, or about 340 years of 40-hour workweeks.

The structure of each neuron takes a nontrivial amount of time and resources to uncover, but researchers believe it is worth it. Neuronal maps have been used to investigate the pathways of amyotrophic lateral sclerosis (ALS), the disorder brought into the public eye by the Ice Bucket Challenge on social media. The maps have also been used to investigate the risks of galactic cosmic rays to astronauts’ central nervous systems during a space mission.

There is little value, however, in multiple researchers mapping the same neurons. Giorgio Ascoli, professor of bioengineering at George Mason University, recognized that barriers to sharing neural maps were hindering progress in the fields of brain science. He had a vision of an open-access repository for neural maps on the web, with researchers freely exchanging data.

Ascoli called his vision NeuroMorpho.Org and launched it with his team, even though the path wasn’t easy. In the beginning, 15 to 20 percent of invited researchers accepted the opportunity to upload their data. Now, 13 years after its conception, they steadily have more than 80 percent of invitations accepted.

The results have been worth the effort. The team calculated that as of 2017, the 7.5 million downloaded reconstructions would have taken 100 people working for 1,000 years if they had to independently map those neurons. Sharing data saved $600 billion in labor.

In the future NeuroMorpho.Org seeks to collect the minimum number of neuron maps needed to fill in the gaps in our knowledge with modeling. Not every neuron in existence needs to be mapped to understand how brains work, but multiple copies of each neuron type in every brain region are needed to make predictions about unmapped neurons. It is a daunting task, but the researchers remain optimistic.