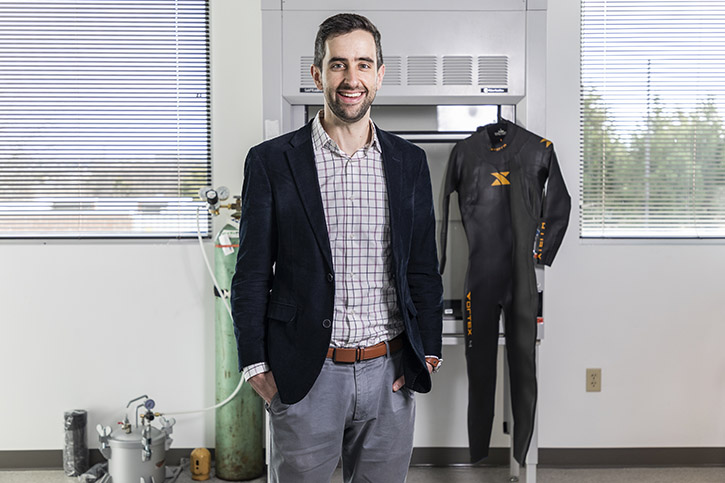 A George Mason University researcher is part of a team of scientists who have devised a wetsuit treatment that greatly increases the amount of time divers can safely spend in bitterly cold water.

Jeff Moran, an assistant professor of mechanical engineering within the Volgenau School of Engineering, and researchers from the Massachusetts Institute of Technology (MIT) have come up with a plan to triple the survival time for swimmers in wetsuits in unforgiving environments, including Arctic waters. The team, which worked on the project in conjunction with the U.S. Department of Defense and the U.S. Navy SEALs, published their findings in the June 2018 edition of the journal RSC Advances.

The development comes at a critical time as the U.S. military is seeking to expand its presence in the Arctic. Continued melting of the polar ice caps means the region will see increased shipping traffic, commercial fishing and efforts by various nations to tap the region’s many resources, including oil.

“Current wetsuits—current solutions that we have for diving in super-cold water and very cold conditions—are fundamentally limited,” Moran said. “Hypothermia becomes a serious risk after 20 to 30 minutes. We saw room for improvement.”

The wetsuit treatment will also have applications for swimmers, athletes, surfers and recreational divers.

Standard wetsuits are made of neoprene, a stretchy type of synthetic rubber that is filled with pockets of air that account for most of the material’s volume and half of the heat that escapes. When the wetsuit is placed inside a five-gallon pressure tank—no bigger than a beer keg—filled with a heavy, inert gas such as xenon or krypton for one to five days, the heavier gas replaces the air within the neoprene. The process creates an artificial blubber-type substance that greatly enhances the wetsuit’s thermal insulation properties.

“The fundamental idea of the project is to replace air with a better insulating gas,” said Moran, who worked closely on the project with Jacopo Buongiorno and Michael Strano, the MIT professors whose visit to the Defense Science Study Group inspired the project.

The breakthrough could have significant national security implications for U.S. military personnel operating in water colder than 10 degrees Celsius (50 degrees Fahrenheit) by increasing survivability in those conditions from less than an hour to as long as three hours.

“The main impact of this materials technology is delaying the onset of hypothermia for the warfighter,” said Anton Cottrill, an MIT graduate student and coauthor of the journal article. “You can modify a current wetsuit using the process that we have developed to essentially double the time that a diver can spend in frigid, arctic waters before the onset of hypothermia.”

The innovation makes the treated wetsuit’s material a better insulator, but it also makes the suit easier to put on, move around in and take off than conventional suits because the treated versions are 40 percent thinner, said Moran, himself an amateur diver.

Oscar Barton, the chair of Mason’s Mechanical Engineering Department who taught at the U.S. Naval Academy for more than 20 years before coming to Mason, lauded the breakthrough for its potential contributions to the U.S. military.

“There’s always an effort to push the envelope for anything that involves man and machine,” Barton said. “In my mind, it’s taking what we do in the classroom, developing the technology and getting it to market.”

Moran and his team hope to soon complete a stable long-term version of the wetsuit and begin human trials. They’ve already applied for a patent to protect their work.

“The goal is to make diving in cold water a less miserable experience,” Moran said.